Cannes is located about 30 km from Nice in the department of Alpes-Maritimes of Provence-Alpes-Côte d'Azur region.

Currently, 16 sites in Cannes are classified or listed as Historical Monuments. Among them are the Suquet tower, the Saint Anne chapel and the Notre-Dame-de-l'Espérance church, which are part of the old Cannes town and several 19th century buildings: Villa Domergue, Villa Romée, Hotel Carlton, the music booth of the Allées de la Liberté, the battery of the Convention, and Villa Rothschild.

In the nineteenth century the appearance of the English aristocracy transformed the city into a winter luxury resort. Since that time the old port has welcomed yachters from around the world. Starting from 1859, the villas-palaces of Croisettes were built and soon thereafter the Cannes regattas became a renowned international yachting event.

Since 1946, its international film festival has made Cannes a privileged place for lovers of great cinema. In addition to the Cannes film festival held each May, the Palais de Festivals also welcomes several international fairs and exhibitions throughout the year. The Port of Cannes has become the rendezvous for pleasure yachts bearing the rich and famous.

During the tasting visits, you will particularly appreciate the cuisine of the Maitres Restaurateurs, as well as the wines of the Abbey of Lérins. 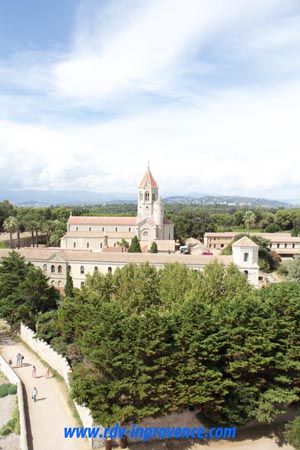 CANNES: SAINT-HONORAT AND HISTORY OF ITS ABBEY

The island Saint-Honorat, formerly Lerina, takes its name after Bishop Saint Honorat, honored by both the Roman Catholic and the Orthodox Churches.

The island of the Saints of the Mediterranean for several centuries, Lerina had become a desert when Honorat first visited at the beginning of the 5th century.

Around the year 400, the apostle founded on the island one of the most powerful abbeys of all Christian times. Saint-Honorat served as Bishop of Arles from 427 to 430.

Since his death, the Abbey has housed several bishops and saints: Saint Maximin, Saint Loup, Saint Eucher and Saint Cassien. Following the documents, in 1259 Pope Alexander IV confirmed all the privileges, property, rights and immunities possessed by the Abbey of Lérins. The abbey counts more than one hundred names of places: convents, priories, seigneuries in Provence, Liguria, Corsica, Catalonia.

From the 15th century onwards, the Abbey of Lérins fell into decline. By 1787, there remained only four monks, when a royal edict secularized the abbey. Having become national property during the Revolution, it was purchased subsequently by Alziary de Roquefort.

The Abbey can be visited by taking the a ferry from Cannes to Saint-Honorat (Lerina). 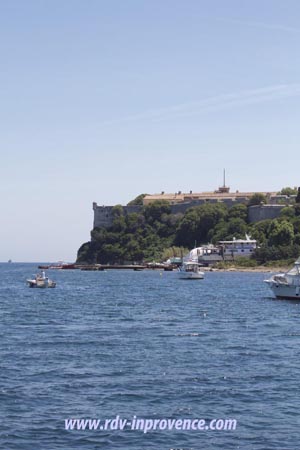 The island Saint-Marguerite (Lero) takes its name from a chapel erected in honor of a Saint Margerite, martyred at Antioch in the third century.

There is also a legend saying that St. Margerite was a sister of Honorat. As the rule did not allow women to live on the island of Monastery, Honorat had led her sister to the other island, promising to come and see her once a year. Margueritte accepted, on the condition that this visit should take place at the flowering of the almond-trees. She prayed so strongly that these trees bloomed several times a year ...

In the 17th century Saint-Marguerite became the royal fort. The fortification on the rock was built by Richelieu in 1633. A state prison was installed in in the royal fort, where was detained the “Man in the Iron Mask", probably twin brother of the king.

Currently the Museum of the Sea is located on the site of the royal fort. Its collection contains archaeological excavations. Among the artifacts on display, are objects of pre-Roman occupation and the Hellenistic structured settlement. The collection also contains material from the 4th century AD and decorations from the 1st century BCE (paintings, scultures, and masques).

The island is open for visitation by ferry from the port of Cannes to Saint-Margerite (Lero).

The old town of Cannes was founded around Suquet, port and fortress of the Oxybiens, people of Ligurian origin. This oppidum of the Ligurians later became the Chateau of Marseilles, then the Chateau franc and finally it was integrated into the community of Cannes which had for its suzerain the abbot of Lérins.

One can still find some beautiful testimonials to Cannes’ glorious past: the ruins of a castle started around 1070 by the Abbot of Lérins, Adalbert II, the tower known as Mont Chevalier, the Chapel of Saint Anne and the Church of Our Lady of Good Hope (17th century) with a beautiful reliquary and part of the ancient treasure of the church of Saint Honorat.

Since the 16th century, the castle has been in gradual decline. During the Revolution it was sold as national property. In 1919, the municipality of Cannes acquired all the buildings associated with the site.

CANNES: FROM A FISHERMENS TOWN TO A CITY IN THE ROCOCO STYLE

In 1834 Lord Brougham, chancellor of England, was on his business trip to Nice. His journey was interrupted by the cordon sanitaire: the Sardinian government of Nice prevented travelers coming from the west of Var river in order to avoid the spread of cholera. Lord Brougham makes a stopover in a fishing village: Cannes. Amazed by the panorama, he decided to come back every winter and he eventually built a home nearby.

Following the chancellor, other aristocrats wanted to know this little paradise and a few years later the peaceful village had become a luxury climate resort with its palaces in the rococo style on the Croisettes. The port of Cannes began to receive its first yachts.

Following the English, Russian aristocrats settled in Cannes. The Orthodox Church of Saint Michael the Archangel built in 1894-1896. It is located on boulevard Alexandre-III.

Since 1946, the International Film Festival made Cannes known all over the world. Movie lovers from around the world come every year in May to attend this event. The steps of the Palace and the aisle of casting of actors hands has become a place of pilgrimage.

Two theaters are located in the city: Alexandre III Theater and Aquarius Theater.

The departmental conservatory of music and theater is installed in the old castle of Font-de-Veyre.

Founded in 1961, the Cannes dance school is considered one of the best in the world. The regional school of actors trains the future professionals of the cinema.