Ansouis is located 31 km from Aix-en-Provence in the department of Vaucluse, in the Provence-Alpes-Côte d'Azur region.

This small village is a seductive place which grips the visitor with its authenticity and its heritage: the millenary castle of the 10th century, the parish church Saint Martin of the 13th century with its four bells - Sainte Roselyne, Saint Martin, Saint Delphine and Saint Elzéar, the village houses of the 15th and 16th centuries and the towers of the old ramparts converted into dwellings.

Overlooking the village, at the foot of the feudal castle of Ansouis, one discovers a magnificent view on the hills of Lubéron, as well as the plain which lies below.

The wines of the region have been certified in the Luberon appellation, in the Pierrevert appellation and in the Ventoux appellation. For wines lovers, several producers are located not far from the town of Ansouis. The Chateau Turcan which is located about 2 km from Ansouis offers visitors the opportunity for the tasting of its wines and a visit to its museum.

The region is also known for the important breeding of truffles: lovers of truffles can visit the house of truffles and enjoy the wines of the Luberon (la maison de la truffe et du vin du Luberon).

The Museum of Arts and Crafts of Wine and the Museum of Georges Mazoyer, an artist who is passionate about the underwater world, welcome visitors with open arms.

MILLENNIUM CASTLE OF ANSOUIS: A CASTLE WITHIN A CASTLE

The construction of the castle of Ansouis began in the year 960 AD. Originally a fortress, it was transformed into a castle during the 12th and 13th centuries, then expanded then in the 15th and 19th centuries. Its originality stems from the interweaving of the two structures, which transports the visitor across several centuries of history within the span of only a few meters.

The north side of the castle dates from the medieval period with its dungeons, watchtowers and ‘machicolations’, the latter an opening between the supporting corbels of a projecting parapet or the vault of a gate, through which stones or burning objects could be dropped on attackers. The south side of the structure features a classic 17th century Mediterranean building, including the body of the building and elegant terraced gardens in the French style. Its rich adornments include spaces festooned with statues of the lions, vases from the 17th century, as well as the entrance door adorned which is adorned with embossed keys.

Between 1178 and 2008, the castle of Ansouis was owned by the Sabran family, and subsequently the family of Ponteves, which took title by adoption according to the the laws of 1832, thereby bringing to a close the former rights of the Sabrans. In 2008, the castle became the possession of the Rousset-Rouvière family. The castle is now open to the public and hosts concerts during the summer months. CHURCH OF SAINT-MARTIN AND OF

The church of Saint-Martin dates from the 12th century. Its facade is fortified and crowned by a small wall-bell tower with arcades.

The interior contains traces of Roman frescoes with flowery motifs, and within the reliquary it features busts of the saints Elzéar and Delphine.

In 1299, the young lord Elzéar de Sabran and Delphine de Signes married. The bride and groom secretly exchange an oath of chastity.

The valiant knight ultimately gained canonization. His widow, after a long life consecrated to the poor and the sick, obtained the qualification of blessed. Their reliquary bust is in the adjoining Saint Martin parish church.

Underwater explorer and artist Georges Mazoyer has gathered in his collection many examples of his marine discoveries and included many exemplars of his artistic works: paintings, stained-glass windows and sculptures in concrete. The museum is located in the 18th century vaulted cellars on the rue du Vieux-Moulin. The house has been entirely renovated by Mazoyer, who completely renovated the ground floor in order to repurpose it as a museum and the first floor workshop as a space dedicated to his paintings.

Visitors are welcomed by a small Mediterranean garden decorated with imposing sculptures of sea animals shaped in concrete.

In the exhibition, one will appreciate the freshness of the reconstruction of a marine grotto, in which enamels transmit soft multicolored light.

The history of the truffle dates back to antiquity. Its fame is due to its purported aphrodisiac qualities. But in the Middle Ages it obtained the connotation of "diabolique". Despised throughout France, it was rehabilitated by the Popes of Avignon who insisted its consumption at their banquets and receptions.

The first cultivator of truffles Joseph Talon is native of Vaucluse. He had the idea of ​​planting glands of truffle oaks, and ten years later he discovered beautiful truffles.

There are three types of Luberon truffles: Melanosporume, Brumale and Aestivum.

The Melanosporume truffle is black on the inside and black on the outside. It is collected from December to March. Good for cooking exept at high temperatures.

The Brumale truffle is similar to the Melanosporume truffle, but clearly distinguishable, black truffle inside and black outside. It is used in the industrial preparation because its aroma remains after high temperature cooking.

The truffle known as Aestivum is white and beige inside and black outside. It is collected from May to August. Its aroma reminiscent to notes of hazelnut and artichoke. It does not support high temperature preparation during cooking, and is added as raw ingredient to diches.

TASTING VISIT: THE WINES OF LUBERON

The history of viticulture in the Luberon goes back to antiquity. The wines are prepared at the base of juice assembly of several grape varieties in order to obtain the rich and unique bouquet of each wine. Into the assemblage of the whites enter Grenache Blanc, Clairette, Vermontino, Bourboulenc, Roussanne, Marsanne and Viognier. Syrah, Grenache Noir, Mourvèdre, Carignan and Cinsault are the grape varieties used for the production of reds and rosés. The white wines are characterized by vivacity. Its fruity wines possess an aromatic range from grapefruit and peach to honey and to dry toast.

The reds are round and fruity. Dominating ripe red fruits - blackcurrant, blackberries, raspberries. The red wines raised in oak barrels have spicy notes.

The rosé wines are distinguished by aromas of red fruits, especially strawberry and currant and are characterized by a beautiful freshness. Located roughly 2 km from the village of Ansouis, the Castle Turcan has passed down from generation to generation for more than 150 years.

The Museum of the Castle has a rich collection on the history of arts and crafts of wine. Housed in in about 1,550 square yards space, the private museum contains more than 3000 objects including those of the Masterpieces Gallery.

The collection focuses on the trades that contribute to the production, conservation and serving of wine: bottles, bottles, working tools for vines and cooperage ... from around the world.

In the separate room of about 475 square yards is situated the “Carre des pressoirs”: the collection contains 14 machines of different techniques and centuries from the monumental community or abbey presses to the most modest domestic presses, fixed or mobile.

The wines of the estate are presented through the ranges the Château Turcan and the Louis Turcan in three colors. The house also offers the rosé sparkling wine "Les Bulles de Turcan".

The wines of the "Château Turcan" range are fruity and well-balanced.

White wine are characterized by aromas of citrus, flowers, linden, liveliness and freshness. It accompanies well a tartar of salmon and a sea bream cooked in the oven. 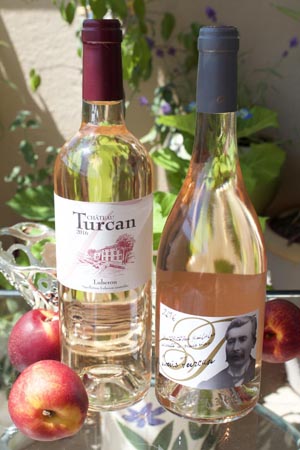 The Château Turcan rosé wines are characterized by notes of strawberries and raspberries. It will be enjoyed as an aperitif with a salad of tomatoes and mozzarella, shrimps, sausages with grilled herbs.

Vinified and matured in barrels, the wines "Le Mouis Turcan" are woody, rich by complex and subtle aromas.

The Louis Turcan cuvée is characterized by fine notes of fruit, spices, flower. It is the gourmet rosé which accompanies well a roasting beef, lamb and vegetable.

Museum and cellar open all year from 9:30am to 12pm and from 2:30pm to 6pm. Closed Monday morning, Wednesday and Sunday.

In July and August, open every day.