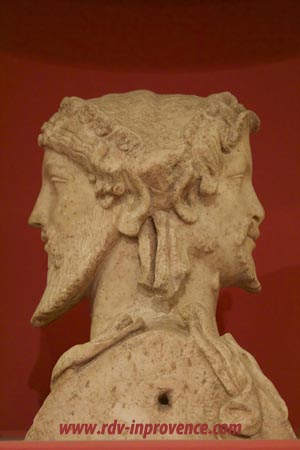 Fréjus is located about 65 km from Nice at the foot of the Maures and Esterel hills, in the department of Var of Provence-Alpes-Côte d'Azur region.

Originally named Forume Juilii, the town of Fréjus has a rich historical and architectural heritage dating from the time of the Roman Empire and throughout the Medieval period: Arénes, Theater, Aqueduct from the Roman period, architectural ensemble around the cathedral, which also served as the local bishopric.

Currently 29 Frejus sites are protected under the designation of Historic Monuments.

As part of tasting tours, one will appreciate the cuisine of Maitres Restaurateurs, sweet specialties of Fréjus region, and the wines of Côtes de Provence Fréjus appellation.

The foundation of the Roman colony at Fréjus is dated from the first century BC. Its founding was related to the creation of the Via Aurelia, the trade route between Rome and Spain.

Later, during the reign of Octavian, Caesar’s successor, Frejus became a port and naval base of the Roman Empire. Remains from this period include the ramparts, the port, the gates, the amphitheater (Arénes), the theater, the aqueduct and the spa complex.

The Roman town walls are situated at the Clos de la Tour. The route of the Roman wall follows the relief of the rocky hill on which Frejus was built.

Roman port of the Lantern of Augustus

The ‘old harbor’ is considered as a continuation of the town walls. The Roman military port was created from scratch. It was connected to the sea by a channel and its entrance was marked by a small light house, which still exists today known as the "Lantern of Augustus." The old channel was eventually lined with alluvial soils which gradually buried it completely, thus the Lantern Augustus appears today as a mere part of the surrounding walls.

“Orée” Gate (Porte d'Orée) was designated an Historical Monument in 1886. It is located near Moulins street. The Agachon Gate was not saved.

Western Gate of the city opened on the Decumanus Maximus. It is located not at Henri Vadon street. The Rome Gate was not saved.

The amphitheater was built in the late first century AD, probably for gladiator fights and hunts of wild beasts.

The amphitheater is open from Thusday to Saturday:

Closed on holidays. No access to site 15 minutes before closing.

The construction of the theater probably dates from the first century AD. Today the theater retains portions of the original walls, orchestra, and the remains of the stage structure.

The Theater is open:

Closed on holidays. No access to site 15 minutes before closing time. Notably the biggest portions of the Roman Aqueduct still in existence are located in the park of Villa Aurelia.

For a distance of about 40 km, the Aqueduct was built to drive waters of “la Foux” et la Siagnole (Mons) sources to the highest point of Fréjus.

The remains are located on Aqueducts street, on street of XV Corps, on Henri Vadon street and in the park of Villa Aurelia.

The park of Villa Aurelia is open daily:

It was renovated in the style of the Italian Renaissance.

Recently, the Villa Aurelia has become a place dedicated to photographic exhibitions.

The archaeological treasures from the ancient city of Forum Julii, discovered within the Frejus territory, are on permanent display at the Municipal Archaeological Museum. The collection contains the prototype of the symbol of Frejus: the head of the two-headed Hermes. In the collection proper, one will find artifacts such as the polychrome mosaic "panther", ceramics and pottery from the Roman period, as well as objects from the local environs. The museum is located in a building of the Episcopal complex, behind Formigé square.

The museum open every day, except Mondays and holidays:

Frejus is one of the first bishoprics founded in Gaul before the recognition of Christianity as the region's official religion.

Bishop Ursio was consecrated there in 374 at the Council of Valencia. Over time the area surrounding the Episcopal complex became densely urbanized with a high concentration of public and private buildings. Through the end of the 12th century, indeed, the city prospered.

From the 14th century, the appointment of bishops was dictated by the pope in Avignon, who was established independently of the patronage of the local denizens of the region (read: the Chapter and the Counts of Provence). Strong personalities succeeded one another over time, such as Jacques Duez who became Pope in 1316 under the name of John XXII. During this period, Frejus remained a very small town, existing by fairs and wheat markets, and starving for decades from epidemics, piracy attacks and disorders of the Civil War.

In 1481, the County of Provence was attached to the kingdom of France and underwent profound administrative and political changes. The episcopal city experienced strong growth and Frejus became a great agricultural center.

The Episcopal complex includes the Cloister, the Baptistry, the Cathedral, the Episcopal Palace, and the House of Prévot. The Baptistry is dated 4th and 5th centuries. This Baptistry is arguably the best preserved of that time in the Provence region, and is still hosts of baptisms.

The originality of cloister the Cathedral in Fréjus, it was open to social meeting and dedicated to many "pagan" activities, unlike others cloisters of monasteries in the region.

The Cloister possess extraordinary images painted on the wooden ceilings: some are well preserved, although darkened by time. They are composed of hundreds of mythical or realistic figures: human, animal, or semi-human and half animal.

The Cloister, the Baptistry, the Cathedral are open:

FREJUS: "CITY OF ART AND HISTORY"

Since 1987, Frejus has been known as a "City of Art and History". This designation means that the city has demonstrated a commitment to preserve its archaeological and architectural heritage. Moreover, the local community and its leadership are recognized for their awareness and sensitivity for the architectural treasures from all periods and for all time.

During the period 1988-1994, the new Frejus Harbor was built, followed later by the development of the Harmony Port project in 2001. As a part of new Fréjus Harbor project, there are plans for the development of an artificial cove further inland which eventually might be extended to reach the site of the ancient harbor.

Created in contemporary Roman Catholic style, "Cocteau Chapel" was built in 1965. The overarching theme of the site is the illustration of the Passion and Resurrection of Christ. Work began in 1961, in collaboration with the architect Jean Triquenot, when Jean Cocteau drew up the plans and specifications for the decoration of the chapel. After the poet's death in 1963, Edward Dermit created the paintings and frescoes based upon the sketches of Cocteau. Ceramics were produced by Roger Pelissier. The chapel itself was designated an historic monument in 1989.

For visits the Chapel is open:

Closed Mondays and holidays. No access to site 15 minutes before closing.

THE MUSEUM OF LOCAL HISTORY

Opened in 1998, the Museum of Local History and traditions offers a collection of furniture and Provençal costumes, as well as testimonials and pictures on the tragedy known locally as Malpasset.

The Local History Museum is open:

Closed on Sundays and Mondays October thru March.

Closed on Mondays April thru September.

The restaurant specializes in Provencal gourmet and traditional French cuisine.

A place dedicated to sweet Provencal specialties: calissons, candied fruits, almonds and fruits of Provence with a special note for pavers of Fréjus Cloitre - candy deliciously flaky with almonds.

The pastry artisans of Musso House cook more than 20 different desserts from quite classic to very elaborate, the petits fours, travel cakes, fruit pulp marshmallows and the famous Tropézienne cake.

One can visit the Frejus Zoo on foot or by car. The park is open all year. Throughout the school holidays July thru August, there are wonderful exhibits which feature many types of wild life: Asian elephants, pelicans, hippopotamuses, chimpanzees, vultures, and even lemurs.

For visits the park is open:

The park is open every day from Saturday June 20th to Sunday, September 6th: